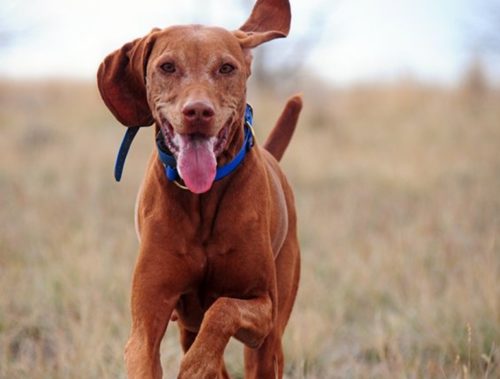 Suede is a wonderful girl!! She has nice bone, angle, topline, and chest fill, big run, drive, and desire in the field. Her side movement shows very nice reach and drive and she is clean moving away (going) and coming (toward). She is affectionate, has a delightful temperament and outstanding trainability. She is independent, yet wants to do the right thing. Suede's dam is Mosey, our foundation bitch, who is a top producer of Champions in the United States. Suede's sire, Boots, has been an exceptional producer as well.

Suede's a talented girl who wants to please. She is also very aware of me, as her handler in pursuit of titles in conformation, obedience and Rally, and Junior Hunt, and has shown outstanding focus from very early on. Suede is the first dog with which I've done AKC obedience. When she was 16 months in February of 2006 we entered our first trial for a CD title. We qualified and the judge told me that my dog was better than I was. We quickly qualified for the title and then went on to qualify for all three levels of Rally. Suede was ranked 9th Vizsla in 2006 in Rally Excellent.

Suede finished her conformation championship at the time she started her competitive obedience. I had brought Suede out early for a few shows. She picked up a few points, but she was immature and I put her away to come out 3 months later. She then finished in 4 shows. Suede finished her Championship on the first day of a 4-day weekend (5 points, Best of Winners, Best of Opposite Sex over 3 bitch specials). This was in Denver, at the biggest show in CO. Two days after she finished, I moved her up to compete in Best of Breed and she went BOB over 10 specials, including the top two dogs in the country and a Judges Award of Merit bitch winner from Nationals. The top two dogs were with their handlers, fresh from Judge's Awards of Merits at Westminster.

Suede and I completed her JH (Junior Hunt title) at 17 months. Between 16 months and two, Suede completed 6 titles in four venues. After several month of maternity leave, she completed her SH (Senior Hunt title) working with her co-owners, Aaron Davis and Mel Reveles. Mel handled her in her tests and she qualified in 4 straight passes.  Then, she went right on to earn her MH (Master Hunt title) in 5 of 6 tests with my (Judy) handling the last two qualifying braces!!  Suede earned her VC (Versitiliy Certificate), and then her ROM (Registry of Merit for outstanding producers).  In 2010 we entered Suede in the All-Star Review at the 50th Anniversary Vizsla Nationals events in Oconomowoc, WI and she went Best In Review (BIR) over a very strong entry.  The All-Star Review is "devoted to inspiring the preservation of the true working Vizsla".  Only dogs with a Championship and the highest of Hunt Titles (MH) or Field Trial Titles are eligible to enter. This is an honor and a REALLY BIG deal!!!

Aside from Suede's exceptional drive and trainability translating into success in obtaining titles, her love for her people and desire to please are what make her uniquely *Suede*. She is an absolute pleasure to work with, is always up for a good cuddle, and adores food above all else. Her excitement for life makes an off-leash run an adventure as she zooms in and out of sight in search of anything that might interest her. Perhaps she was a Labrador in another life because she is a natural swimmer and will dive into the water even on a chilly day. She is so full of personality, we often find ourselves laughing at her antics which often center around her attempts to earn a treat or a taste from our plates. Suede also very much enjoys her four-legged companions and is a master at enticing the other Vizslas to play.

We're so blessed to have Suede in our lives. She brings much life and joy to our home. Life without Suede would unimaginable and most likely a touch boring.