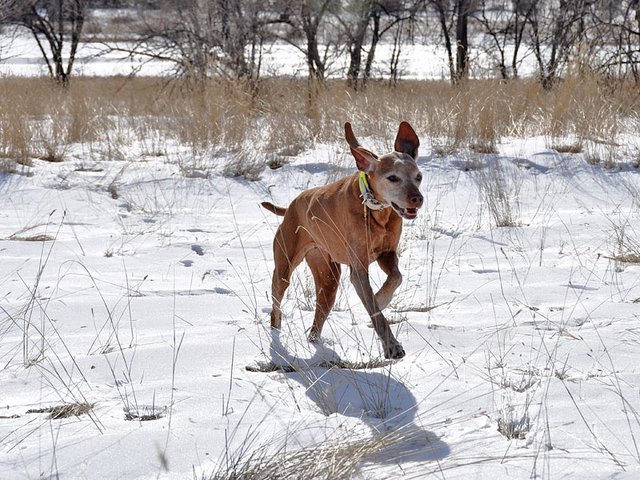 Saying goodbye to a being as spirited as our beloved Mosey would be devastating if not for the countless memories of beauty and joy we shared.  Mosey gave us almost 14 years of love, laughter, and…training challenges.   We’re sure she believed that if she could just keep us in step with her, life could have been so easy for us all!

Mosey was our Vizsla Ambassador.  She charmed our visitors.  She welcomed each person as if they were long-lost friends and as soon as they were settled on the couch, she would gently curl up on their laps.  The comfort she gave…then, lifelong friends they would become.  We lost count of the number of times our guests asked if they could just take Mosey home with them.  Or, if we could make sure their puppy would be just like Mosey.

As our foundation bitch, Mosey gave us a solid base from which to grow our breeding program.   She produced structurally sound Vizslas with good health, temperaments, and loads of natural ability.  We were most fortunate and couldn’t have wished for more in a brood bitch.

Though we didn’t finish Mosey’s hunt test titles (accidently made Mosey gunshy), she found bliss in the field.  Her natural ability, drive, and love for hunting upland game were strong.  These gifts live on in her get and grand-get.  When she was around 10 years old, Mel and Aaron decided they would put Mosey back on birds (with the ultimate goal of finishing her Junior Hunter title).  Hah!  Mosey had other plans and they quickly learned it was her way or NO way.  And so it was.  For the last years of her life, Mosey worked her birds as she wanted to: pointing, then pouncing, and then "The Glorious Chase!"  To see Mosey chase and flush, chase and flush, chase and flush her birds brought us much laughter.  Though she was a senior, in those moments she held her own against any younger dog—she was vibrantly healthy and had so much prey drive.

Just a notch higher than Mosey’s prey drive was her food drive.  When there were treats to be had, Mosey gave her full attention.  She allowed the uninitiated to actually believe they might be in charge.  Then, they realized Mosey was standing at attention not for them, but for the treat in their hand.   And there, so clearly stated in her eyes was her humor, beauty, but most importantly, her fortitude.

There will never be another quite like Mosey.  Though we’re thankful to see glimmers of her in her get and grand-get, the whole enchilada lived within Mosey.  She was a True Vizsla Bitch.  All of these years later, with all of the knowledge and experience we’ve gained, should we be blessed with another Mosey we would still be challenged to get it right.  But, this is a challenge we would welcome with open arms and hearts. Until we meet again, we find comfort knowing Mosey is busy at the Rainbow Bridge finding all of the pockets that hold yummy treats. And, we’re sure to her delight she’s found the treats flow freely in Heaven!