We are both retired educators from NY, having chosen Boulder, CO, for its healthy, active lifestyle. We each have Masters degrees and have been fitness runners for almost four decades. In addition, Judy coached cross-country and track and was the New York State Coordinator for the Girls Cross-Country Program (1978-1982). She was a competitive Masters Runner at the elite level from 1984 - 1987, logging 60 - 70 miles per week year round and was ranked 5th masters runner in the US by "Runner" magazine (1985). She is also the winner of 14 National Masters Championships and Third Place overall in the 10K Worlds Veterans Championships (1984). Edj has competed in many marathons and triathlons, and we've both worked at running camps.

Our involvement with Vizslas bega 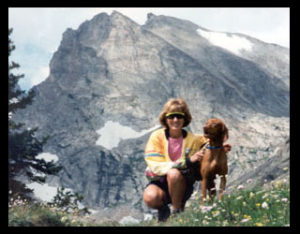 n in 1995 when we moved to Colorado. Cassidy (BISS CH Rivercity's Quenton Cassidy MH ROM) arrived a few days after we did. Cassidy is named after Quenton Cassidy, the main character in John Parker's book, "Once a Runner." How fortunate we were that Will Snyder sent us that boy! We chose the Vizsla because of our active lifestyle, the "wash and dry" aspect of the breed, and their affectionate nature. We wanted a dog that followed us around, slept on the bed, and one who would enjoy sharing our runs and walks out in open space.

Although Judy had a GSP as a young adult, we had waited many years to have a dog. Once Judy retired from teaching and we moved, Judy worked at home in sales. Judy was the Advertising Director for the Road Runners Club of America - selling space advertising in the national magazine, "Footnotes." The position started in 1986 but in 1995 (to 2000) became full time. Judy still works part time in sales for Marathon Printing, Inc.

When Cassidy was 7 months old, we thought that, since his breeder encouraged us to show, we had better get started. We attended a few handling classes and then entered Cassidy in the largest show in Colorado. With knees shaking, Judy showed him from the puppy class to Best of Breed and Sporting Group Three. It was his and Judy's first dog show and we were hooked. Little did we know then where this would lead.

Our early success sped us onto a fast learning curve and a world that involved other breeders, dogs from all over the country, Vizsla clubs (including The Vizsla Club of America) and hunt training. Judy continued to handle Cassidy and he finished his championship within a few months by earning Best of Winners at the CT Valley Vizsla Club Specialty. We were visiting the East coast to see family and so we entered that dog show since we were in the area. That seemed to become our M.O. - if we were traveling somewhere, why not do a dog show!

When Cassidy was a year and several months, Mosey arrived (CH Rivercity's Boulder M Kiptanui ROM). Mosey is named after Moses Kiptanui, the former world record holder in the Steeplechase. Mosey is our foundation bitch.

Mosey finished her championship at 11 months always going Winners Bitch (often Best of Winners). Judy was more experienced and Mosey also was a special dog. Mosey was our foundation bitch for our breeding program.

Today we spend our time with our many Vizsla friends and extended Vizsla family (locally and throughout the country) focusing on quality breeding while proving our dogs in the show ring, in the field, and sometimes in obedience. Although we don't hunt, we feel it is important to breed for a versatile dog that knows its job. As a result, we do field work with our dogs. Vizslas are hunting dogs and if we don't prove hunt and then breed for it, we change the breed. We give much time and energy in support of our puppy homes and stand behind every pup we breed (for the life of that puppy). We are charter members of our local Vizsla Breed Club – having had extensive involvement, not just as members, but as a "worker bees." Currently, as a member of RMVC Breed Education Committee, Judy spends much time educating others about the breed and reputable breeding practices. We also serve as mentors to those who have our dogs and are interested in the best possible healthy pets, in performance events and/or in continuing the Bolder Vizsla tradition of excellence and accountability in breeding. Although we respect and use traditional Western Medicine, our general approach to health is holistic. Overall, we seek to constantly improve our working knowledge of various relevant areas of the Vizsla breed in order to continue to breed lovely, healthy dogs that meet the ideals of the Vizsla standard. The responsible Vizsla breeding community is widespread; we have shared experiences with many over the years. There are a few who stand out. So, lastly, we wish to acknowledge those who have given their time to help us grow in this breed -- first to support us when we began our efforts in performance events, then as reputable breeders of fine dogs. Those who have given of their time to mentor: Will Snyder (Rivercity's Vizslas), Jan Simer (Pleasure Vizslas) and Linda Durham (Renaissance Vizslas). Last, but not least, our good friends and field mentors for us and our puppies -- Mel Reveles and Aaron Davis of Fusion Vizslas.

This site is devoted to our current efforts and accomplishments and our outstanding homes; we appreciate your visit.